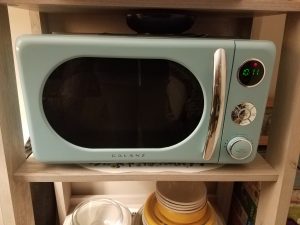 Shortly before I was born, Mom and Dad decided to upgrade and expand our kitchen, which was very small at the time for their growing family of four, soon to be five, children. Together Mom and Dad had designed the Cape Cod style house during WWII while Dad was serving in the US Navy and then built the house several years later after he was discharged, doing most of the work themselves. While the main floor and second story were still being finished, they moved into the unfinished basement with my oldest siblings where they “roughed it” for the next few months until the house was completed. Dad always described that time as “roughing it,” and while it probably was difficult at times (more so I am sure for Mom and Dad,) it was mostly remembered fondly rather than negatively by the family. Years later when Mom and Dad decided to expand the kitchen, they once again had to set up a makeshift kitchen in the still unfinished basement and “rough it.” My sister remembers cooking and eating dinners there in the basement with our parents while helping to plan and design the kitchen upstairs. This was well before the age of kitchen designers and home improvement shows. The ideas were all their own. Dad once again did all the work himself. He fit it in whenever he could, between shifts at his job or on his days off. Everyone was looking forward to the new modern kitchen! It was a kitchen design that would be ahead of its time.

Fast forward xx years, more than I care to count! We are remodeling our kitchen in our Cape Cod style house and are now “roughing it” in the basement. We are fortunate to have a finished basement and comfortable surroundings, though it is a bit of a challenge to prepare meals without a “real” kitchen. I’ve got my two burner Coleman camp stove and cute little new retro microwave. It is true that everything old is new again. I am reminded of my family all those years ago “roughing it” in the basement. They survived. They actually thrived. Mom and Dad, are you smiling at us and remembering too?

After a couple of years of planning off and on, the kitchen remodel has finally begun! The cabinets came out gently. The tile floors, not so gently. In this time of COVID, we are living, working, and going to school among the chaos of construction, or deconstruction at this point. Packing up the kitchen and improvising a temporary set up in the basement was tiring enough, but we are also having hardwood floors installed on the main level. So pretty much everything had to move. We are exhausted but looking forward to the end results. As my sister-in-law told me, “You’ve got to crack some eggs to make an omelet!”

We’ve been planning an interior remodeling project for years, although for one reason or another it seems as though those plans always get put on hold. Life, kids, viruses, just to name a few of those reasons. So we decided to start with exterior home improvements on our cute little Cape Cod this summer and work our way to the inside. Specifically, we chose a new shiny black mailbox as the first project. Love it! One project down, dozens more to go. Watch your inbox and stay tuned for updates along the way! 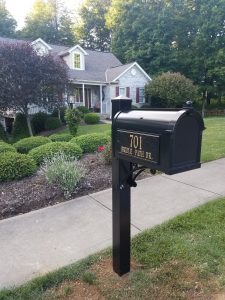 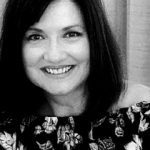